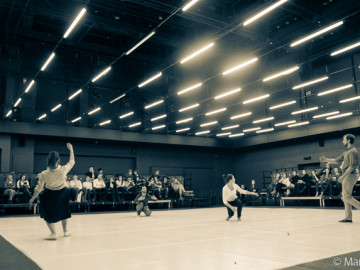 We keep on posting reviews of project ROOM FOR TSEKH’14 Festival. Of the three Russian performances shown as part of the festival interdisciplinary piece “Moments” is the most recent one. Polina Romashkina ponders its origins, capabilities and prospects in her review.

Translated by Yana Lebedikhina. Original text in Russian was published by ROOM FOR on the 23rd of December, 2014.

“Moments” presented at TSEKH festival is created as part of Blackbox lab where artistic teams work with space and audience perception.

This lab is a project of Meyerhold Centre which positions itself as training ground for young directors, giving them a great chance to get experience and introduce themselves. On the other hand, here like everywhere we see a propensity to support only short-term projects. What’s been sown is not given time to sprout up, and it’s particularly experimental works that are worst afflicted, as they don’t quite fit into the framework of the task “more goods, fine and diverse”… (which used to be a Soviet motto)

The team of “Moments” – choreographer Olga Tsvetkova, composer Vladimir Gorlinsky, and dramaturgist Mikhail Durnenkov say that the piece has no choreography, music or dramaturgy as it is commonly seen by audiences. Before the beginning Durnenkov makes a small speech at the lobby that sounds informal and positive. We learn that right here and right now we will be able to observe four performers embody in movement what they see, hear, or feel right here and right now. The audience takes their seats on four sides of the acting space feeling responsible, as the way they watch and think will directly influence the movements of the artists.

The performers take turns appearing on stage. I see their bodies are cautious and specifically tuned.  And there is some resignation to them as well… There are two men and two women, and you might get to know each of them, as everyone moves in a distinct way, unpredictably, at different paces. General composition and rhythm develop randomly and interestingly, and that strongly draws the attention of the audience on all four sides. I see how this attention starts exerting a gradual pressure on the bodies of the performers, setting bounds to their manifestations… They seem to be having trouble handling the amount of information they’re trying to process, they accumulate tension, begin repeating their own reactions, movements, gestures, and now they look like animated characters to me… — flat, funny, and recognizable. Choreographer Olga Tsvetkova is being very talented in the art of photography and says the participants are supposed to act in a state which is similar to that of a photographer – a specific sensitivity to the environment. But if everyone is a photographer, a camera, and a photo at the same time, is there a chance for one to capture the present moment leaking away like water through fingers? The body is inert even if it is fine-tuned like a good instrument. The attempt is worthy, but the mission is impossible. Except for the body-camera being extraordinarily sensitive and the body-photographer having extraordinary reaction that’s been worked on over time and a great deal of experience enabling him or her to keep calm without trying to grasp everything at once… Artists are making an effort. They are making an effort to stay open, but the tension doesn’t let go of them already, and I notice my interest wander away and lean back in my chair to wait for another time they switch off the light to freshen my perception. At some point I feel so much like helping the performers to break away from numbness that I think, “What if I drop my water bottle?” I didn’t have time to, as a sudden loud signal was heard musically; as it was later found out, it had to change something in the course of events… During the performance Olga was sitting at the border of the acting space and rang a bell a few times. These signals, as that signal of the phonogram, switched the performers from the state where they had to do an assigned task into the state of relative freedom of manifestation. That’s what we learned at the discussion. Olga was saying that for her the performance came about to do with non-freedom, and those signals conveyed a certain external locus of control. To me the performance that came off on 11 December was communicating clearly the idea of non-freedom from one’s individual past, of one’s wallowing helplessly in the nets of one’s own habits generated by tension and the fear of life. Before the performance Durnenkov said that everybody might see something personal and emphasized the importance of the uncertainty principle. To me the value of the work lies not in the freedom of interpretation the audience is given but rather in its specific direction, in the courage of leaping into the unknown, an attempt to touch at the horizon, and if the team had had enough time to get through more steps, even those overwhelmed by the novelty of the format might have been able to join in.

When there’s no sure-fire concept, well-honed technique on part of the director, or time-tested team, and the stake is placed on the search and collaborative practice, two months of rehearsals is an infinitely short term. The performance rather seemed to me a presentation of the project to be accomplished in the future. Everything to do with backdrops, however, – the spacing, lighting, costumes, music, and sound – is thought over with a great deal of taste and proportion, supporting the content gently. I experienced music as part of the backdrop, because although the soundscape created by Gorlinsky absorbs real momentary sounds, it still creates a constant environment. If the music had aspired to be a participant, it could have contained the elements of chance to match the action that changes profoundly from time to time…

Another important asset of “Moments”, as I see it, is in the method chosen which is powerful not due to the novelty but on the opposite due to continuation of tradition. Since the 1960s a great many contemporary dance practitioners and philosophers in the USA, Europe and Russia (starting from 1990s) posed questions to themselves related to the choreography of the moment, and the art of improvisation was developing as an independent branch. Taken in this context, a project of this kind might be presented as an educational one. In this case perhaps more information ought to be offered to the audience – it might have been worth to explain why specifically this sort of work is interesting, which artists the team is in dialogue with, what was already being done in that field, and what is new in this particular investigation… The discussion moderator asked the audience for feedback, but there was no end to questions, and I sensed that a lack of common reference points made both the performers and the audience feel kind of baffled like small laboratory animals and kind of proud like warriors withstanding the challenges of contemporary art.

I believe it’s important to support and show this kind of works, and I do hope “Moments” will have a chance to go on evolving, but a frank look at the idea and its actualizing at this stage tells us that the exposure time was too short, and the photo came out blurry. There’s always an option of saying though, “Mmm… it’s even better this way!”