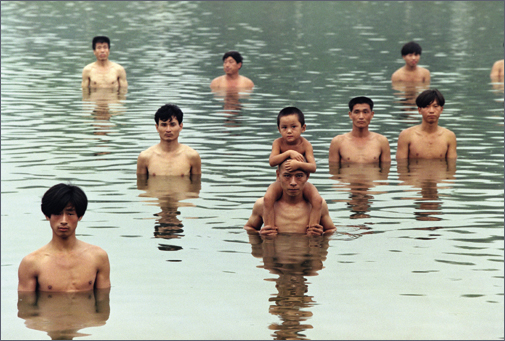 Every repertory theatre with permanent cast members gravitates towards a closed-loop system with vagaries coming only from the top. Ballet Moskva was lucky to have talented director Elena Tupyseva offer her team a project similar to that at “The Place”, a renowned London school. “Choreodrome” is a contemporary dance research program that offers “artists the opportunity to express themselves without being confined by the frame of a particular performance”, a space for experiment.

O 1 February ZIL presented the second “Choreodrome”, new experiences of young artists. I haven’t seen the first one and cannot analyze the dynamics of its development, but “Choreodrome 2” did surprise me.

What seemed surprising to me was that the choreographers did not align their ideas with the preceding experiences and discoveries, as if dismissing the history of contemporary dance spanning 50 years and the significant steps that Russian contemporary dance has taken since the beginning of 90-s till the beginning of 10-s involving TSEKH. This detachment from the context might have been justified, had the works contained profound uniqueness and authentic wilderness, yet they rather showcase a connection with the ballet tradition, the tradition of psychological theatre, and popular dance. Most works draw upon a story, a more or less linear narrative of events or experiences, implying the possibility of a libretto. Although the evening features numerous dance forms, hardly anybody works with the dramaturgy of the movement as it is, examines it as a self-sufficient and one-of-a-kind instrument. In the works “Wormholes and Jumping moles” by Sofia Gaidukova and Konstantin Matulevsky and “Who is the First?” (“Kto Pervyi?”) by Arsen Imenov and Alexei Narutto a search in the field of dance language is quite traceable, but they, too, are dominated by the general tendency for dramatization. When movements start attending to a story or illustrating an emotion, the dancers’ bodies develop excessive tension which is conveyed to the audience; that’s when dance-watching changes into a frenzy of the plot interpretation. The work by Olga Timoshenko “Theoretical structures with indefinite content” might have entered the field of experiment, if the choreographer had been able to select one method of interacting with the partner and to build all the composition based on it.

In his piece for 12 dancers “Cap” (“Kolpachok”) Artyom Ignatyev, curator of the project, works interestingly with space and rhythm. The composition could have acquired a purer sounding, if a single quality of movement and attention for all the performers had been found, and the manifestations of individualities in the solos had been physical rather than acting-like… By the way, I’m still oblivious as to what the name stands for.

In other works the spatial solutions are extremely simplistic, with imposed frontal angles aggravated by apparatuses into the auditorium. Music and light solutions are traditional and often illustrative, leaving an impression that these instruments are not taken into awareness as an opportunity for experiment; the conditioned nature of the stage frame and stage time is also put beyond doubt. Roman Andreykin, an experienced choreographer invited to partake in the project, staged two pieces in the style of an entertainment show – lyric feminine “On the Wing” (“Na Kryle”) based on a folk song and “Esthete” – a kind of rough grotesque featuring men in tail coats and underpants, some weird text, and a chunk of raw meat. And it’s not that I’m against the miscellany of genres when it comes to contemporary art, but reframing or deconstruction is required, a new perspective or something else that can bring what is already known into the question area.

“Stretch” (“Otrezok”) by Konstantin Chelkayev is characterized by distinct dance language and thinking. As I see it, there are too many elements for such a short piece (6 minutes). Creative avidity must have hindered sticking to one thing, so that the action reminds of an inspired yet incoherent speech. What also seemed odd to me was the fact that it transforms smoothly into a “heartwarming” song which supports the vibe of the piece in a way but again brings us into the atmosphere of a high-school concert…

“Choreodrome” promises to be regular. That’s excellent news. It is important and contemporary and surely offers prospects, because the artists of the cast get a chance to broaden their perspective of dance. Yet what direction the project will take depends greatly on the motivation of the leaders and the objectives that they set for themselves, really.