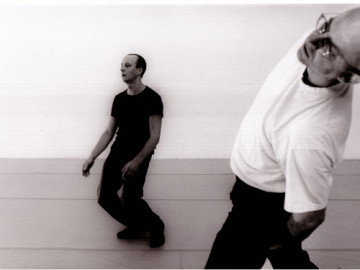 This summer we took part in Jonathan Burrows ‘s workshop called «Writing dancing», where he proposed to investigate choreographic process, re-examine and extend our notions of how a dance can be made and what it can communicate to someone watching it. Leaving workshop with lots of fruitful thoughts we decided to share them with you and asked Jonathan to re-examine some questions from the workshop. As the result we’ve got the interview, which we post below.

Anya Kravchenko: What is choreography?

Jonathan Burrows: The longer I work the less I really understand what is meant by the word choreography, as opposed to the word composition, though occasionally someone says something in a workshop that gives me a glimpse that there may be a difference. Many of us work now within what has been called an expanded choreographic field, which shifts the question again towards the idea of choreography as a way to re-think relationships between things and events, but which may not directly involve bodily movement.

AK: Does it make sense and if yes, what are the reasons to differentiate contemporary choreography and choreography as a wider category?

JB: This is a good question and a very relevant one at the moment, since odd divisions arise between the more conceptually based work which currently dominates contemporary dance, and more recognisable choreographic strategies which are still taught, still loved, still valid, still sought after and yet which seem to belong to us less and less, becoming more and more the property of the commercial or balletic sectors. For myself I’d prefer not to make these kind of distinctions, as they only close down the possibilities of what a new generation might do with either, and in whatever sector.

AK: Do you differentiate the following categories: a choreographer and an artist (performer / dance artist)?

JB: This makes me think about the dancer Chrysa Parkinson, whose practice is based upon her defining herself as an artist, regardless of whether she choreographs or not. Chrysa is now leading a course at Dock in Stockholm, dedicated to performance, and to this notion of the performer having agency as an artist within their own practice, even whilst working to manifest somebody else’s ideas. We are living in a world where many technicians want to be lighting designers, many dancers want to be choreographers and many programmers want to be curators, and it’s all a product of the neo-liberal idea that everyone has the means to get to the top if only they work hard enough, which ignores the fact that we all define success differently and that these hierarchies rob us of the skills and joys of other kinds of working satisfaction.

AK: What is the difference between dramaturgy and composition in dance performance?

JB: Well I’ve started to think dramaturgy has had a big and positive effect on contemporary dance, it’s one of the more important innovations in the art form. And as we understand better what this thinking can do then we get better at using it. I heard a very nice definition recently from Andre Lepecki, which I can only paraphrase but goes something like this: that what the dramaturge must attend to is the action of the inactive. I like that image of someone who notices things that are having an impact, but which may not be so evident. And for me there’s a delicate cross-current of influence between dramaturgy and choreography. I notice, for instance, that how we order, disorder or overlap things itself creates, amplifies and clarifies information. So all the time you’re trying to get to the root of the thing that’s happening, and at the same time that root is being shifted, disguised and reconfigured by how you’re working on it and the order that things occur. This is one of the joys of a durational form.

AK: What is normally the field of a dance maker: a dramaturgy, a composition, or both?

JB: In a way I suppose I answered this question in the preceding paragraph, that somehow the dance-maker is occupying a shifting ground of relation between choreography and dramaturgy, each of which alters the other constantly so that you’re required to pay attention to everything in case the important moment passes you by. I suppose also that beneath this question is the thought ‘where is the body in relation to this thing which is being worked on?’, and this body may not be a moving body, may not even be a human body. And this in turn connects to the question ‘is this body subject or object in relation to the field?’ These questions have a special place perhaps in dance practice because of the way the intense perceptual experience of the dancer is somehow absolutely present and at the same time may not communicate at all to the spectator, or may communicate only on an unconscious somatic level.

So all the time you’re trying to get to the root of the thing that’s happening, and at the same time that root is being shifted, disguised and reconfigured by how you’re working on it and the order that things occur.

AK: How does the movement research define dramaturgy?

JB: For a long time I’ve wanted to work from what movements I already have to hand, which doesn’t mean pedestrian movement but rather that which has been pre-embodied, wherever it came from. And I’ve noticed that what is pre-embodied offers a huge playground for discovery and alteration, especially when following a strong principle that questions what’s being done. My attempts to make more conventional research into finding interesting or resonant material, more frequently lead to a headache and empty hands. But each to their own.

AK: Do you use it in your creative process?

JB: I use whatever means are neccessary. Working as a choreographer is an act of perpetual compromise and confusion.

AK: Where does the meaning of the piece come from: from an artist who creates it or a spectator who watches it?

Dance is something we do, not something we watch, so we begin with an insurmountable communicative challenge.

JB: Some time ago Matteo and I were booked to perform «The Cow Piece» in a festival, who then cancelled us because of a decision to only curate work dealing with the then emerging Greek crisis. And we thought, well we make work which has humour, yes, but at the same time we have serious views, and we are political people in ways which are reflected in our process but not necessarily in what we perform. So we began to make a work whose starting point was the observation that somebody watching, for instance, The Cow Piece, could not know what our politics are. «Body Not Fit For Purpose» on the one hand attempts a critique of the current imperative towards the political and social, and on the other hand is an attempt to celebrate the difficulty of the dancing body to speak of that which matters. The piece juxtaposes dance and music against serious political titles, and reveals both the divide between the two, and at the same time the strange effect of imprinting by which the empty movement and music absorbs the political narrative as though it had always been present.

AK: During the workshop we never discussed the things that didn’t work in the pieces we were creating, is there any specific reason for it?

JB: Well you touch upon something interesting here, and there are three responses that come to my mind. The first is that while I was teaching with Jan Ritsema last year he spoke of his experience of working with Xavier Le Roy on «Low Pieces», and the way Xavier never seemed phased by what didn’t work, but instead went on asking questions of the material and making small adjustments. And I thought yes, Xavier was a research scientist and a research scientist is not concerned with whether something works or not but only with what information is produced, and this patient sifting through the results raised by a question is what distinguishes Xavier’s work.

The second thing I thought in response to your question is that when I myself am in the middle of a process I’m actually very concerned with what doesn’t work, but that this may not be relevant to a workshop situation, where the things a participant might take away with them are predicated upon a very delicate balance of openness and trust, which requires a certain ratio of success in the room. But this may typify one of the problems of the current proliferation of workshops and creative teaching courses, in that you can end up finding yourself more and more in a situation of nicest common denominator, and somehow miss those fractures and sticky problems that produce something that resonates, that is genuinely performative rather than simply functioning.

But, having said all that, I’ve also observed that as artists we have to work out which problems are worth hammering away at, because so many times I’ve seen people persevere with something until they’ve reached a state of exhaustion from which they or the piece never recovers. If they don’t recover they don’t make any more pieces, and if the piece doesn’t recover it ends up heavy as lead, with the weight of a problem that has no real resonance and is never going to produce anything that matters. So my avoidance of too much discussion about what doesn’t work is also an encouragement to time-limit our researches, to throw away more quickly and easily and feel light in ourselves for the process ahead.

AK: The workshop description contains the following question: what dance can do and what it can’t. Can you comment on the answer?

JB: My question is a provocation towards those choreographers, pieces, curators, marketing directors and critics who increasingly frame what we do in ways that attempt to make our art form match other and perhaps more popular art forms that speak to spectators in more tangible ways. Dance is something we do, not something we watch, so we begin with an insurmountable communicative challenge. I don’t want it any easier though, because it’s these challenges that forge the unforgettable. And as an artist, if you start with an acceptance that you can’t say everything in your heart and soul and that your art form can’t say everything in your heart and soul, then you’re more likely to find a way to say something, in collaboration with the medium you’ve fallen in love with for good or bad.

Jonathan Burrows danced with the Royal Ballet for 13 years before leaving to pursue his own choreography. His main focus now is an ongoing series of duets with the сomposer Matteo Fargion , with whom he has given over 300 performances across 31 countries. The two are currently inhouse artists at the Nightingale Brighton and their most recent performance «Body Not Fit For Purpose» had its world premiere as part of the 2014 Venice Biennale. Burrows and Fargion are contributing artists for William Forsythe’s Motionbank website project. Other high profile commissions include work for for Sylvie Guillem, Forsythe’s Ballett Frankfurt and the National Theatre, London. Burrows has been an Associate Artist at Kunstencentrum Vooruit in Gent, Belgium, London’s South Bank Centre and Kaaitheater Brussels. He is a visiting member of faculty at P.A.R.T.S Brussels and has also been Guest Professor at universities in Berlin, Gent, Giessen, Hamburg and London. ‘A Choreographer’s Handbook’ has sold over 6,000 copies since its publication in 2010 and is available from Routledge Publishing.